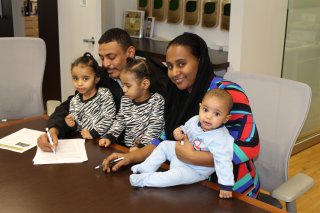 The “American Dream” is often taken for granted in the United States. You are born, grow up, get a job, get married, have children, and buy a home. That home provides your family security and stability for many years and allows your children to grow and prosper. Unfortunately, that dream is not a reality in many countries. Hitham Farah had this dream while growing up in Sudan, Africa. His story is one of hard work and perseverance in the face of uncertainty and doubt. His journey to becoming a homeowner is the reason First Homes is so critical to the Rochester community and its quality of life.

In 2009, Farah lived in the capital of Sudan—Khartoum. A few years earlier, he had visited the U.S. Embassy and applied to live in the United States but was rejected. He then entered a computer-generated lottery and was placed on a list for entry at an undetermined time. “America was my dream,” he says. “I watched American movies, and I love America!” He recalls eating lunch with a friend one day and receiving a call from a number he did not recognize. He had won the “lottery” to immigrate to the United States, and his dream was suddenly a reality. “They said to me: ‘You can come to America,’ and I cried. It meant so much to me; it changed my life,” he says.

In the United States, he moved first to Albany, New York then to Boston and later to Los Angeles. “Los Angeles had very nice weather, but there was a lot of crime. It was not safe there, so I came to Rochester,” he explains.  He married his wife, Nada, while on a trip to Sudan, but returned home without her due to time constraints on his travel visa. When Nada learned she was pregnant with twins, she stayed with her brother in Qatar, while Farah continued working and saving money for his new family to join him.

Farah missed the birth of his twin daughters, Jodie and Joan, and did not see them until they were three months old. “[Hitham and I] did not see each other for nine months,” says Nada. “It was difficult to be so far away for so long.” In 2013, the entire family reunited in Rochester where Farah had rented a two-bedroom apartment. As rents increased and Farah’s wages stagnated due to the slow-growing economy, they moved frequently. That same year, they welcomed their third child, Mohamed, and Farah knew he needed to find a solution to their living situation. “We were renting and throwing away our money, and we needed a home with more bedrooms,” he says. “We did not think we could own a home until my friend told me about First Homes and Shirley Lee.”

First Homes’ Program Manager Shirley Lee, assisted the couple in their first home-buying experience, helping them secure a mortgage loan from a lender, and not long after, close on their four-bedroom, two-bathroom, and two-car-garage ranch-style home in northwest Rochester. “I have neighbors, and they like us, and we like them,” Farah says. Nada is currently taking classes at the Hawthorne Adult Education Center and working on her English. To save on daycare costs, she stays home with their infant son while the twins attend Headstart. “The girls love the new home, and they can play in the backyard,” Nada says. “They even have their own room, which was not possible when we were renting.”

With the median purchase price of a home in the Rochester area at nearly $200,000, many homes are not affordable for starting families. The land subsidy held by First Homes allows the purchase price of homes, like that of the Farah’s, to be below market value—making them available to growing families that may only have one income. To qualify, the buyer must be eligible for a mortgage and have a good credit score to receive mortgage approval from the lender. Says Lee, “It’s so rewarding to work with families and make home ownership possible through First Homes Community Land Trust program. There are more families that could benefit from this program if only we had more homes to offer.”